Okay. More than likely, nothing's going to happen, right? But then again, this morning was kind of a wakeup call, I think.
Everyone in the city was woken up by some kind of loud, reverberating
BOOM.
I sat straight up in bed and just didn't breath for the next 60 seconds as thoughts raced through my head. I thought, 'Worst case scenario, my body should be disintegrating within the next minute, right? Let's wait and see.' When nothing happened, I chugged a mouthful of milk from the fridge and convinced myself that it was just construction nearby. Checked the news bulletins, went back to sleep.
It wasn't construction, and nobody knows WHAT it was, but everyone felt/heard it and none of the news stations are reporting about it. There was also a LOT of very loud plane action overhead this morning. Whatever the military was doing today, it was serious, and it was scary!
Anyway, everyone seems to be wavering back and forth between 'meh' and 'eek' regarding the "rocket" launch this week. I reeeeeaaally hope nothing crazy develops....

Sarah Palin hilarity, even post-election...
She is standing there wearing her Burberry scarf and drinking Starbucks and turkeys are being slaughtered behind her... it's almost reminiscent of an SNL skit. What an IDIOT!

Greetings from Ubud, Bali, Indonesia. Well, I go back to Korea next weekend FINALLY, after another unbelievably long stint of travelling (which has been also immensely thought-provoking and gratifying).
I saw the apocalypse last Thursday. Okay, not really, but I saw the sunrise from Mount Penanjakan in Indonesia and all you can see is VOLCANOES VOLCANOES
VOLCANOES.
Erupting, even.
Java was great but low on sleeping time and stressful in the logistics of everything. Bali, on the other hand, is straight-up CHILLIN. 8 hours of massage in 6 days and swimming, swimming, sleeping outside, swimming, swimming.

Today I was thinking about how lucky I am right now, in my life. i used to go on vaykay when I lived in Pittsburgh and the last few days I would be DREADING going back to the hum-drum, tired mess of normal American life. Nowadays I find myself at the end of a vacation, thinking "Wow, I miss Korean life." Vacation is of course bliss, but life is pretty damn amazing as well! I work hard but I don't drown in my work or dwell on it outside of worktime, and I have enough time and resource to see things and meet people that WOW me all the time.

I also realized how much I have changed from, say, three years ago, because when I read the blogs and Facebook of people I used to know back home, I think
"YOUR LIFE SCARES ME!"
It all feels so... small... to me. I guess there are happy but I would be so stifled in the little picket-fence house in the towns and cities with next-to-no diversity.

What up.
Currently, I am in Pulau Penang,
Malaysia.

w00t Malaysia! I love it here because I have these constant flashes of "Where AM I?"... The country in general is an authentic mix of China, India, and the Middle East, with some Thai, Burmese, and Javanese influences as well. Pulau Penang is generally quite Chinese.
It will be nice to get to a beach in a few days because, to be honest, I could kind of use a vacation FROM my vacation. This trip has been maybe a little too Indiana Jones for me thus far, although looking back I'm quite happy to have done all these things that I would never, never do again. (Like the death-defying trek in the honest-to-god rainforest, for example.)

Anyway, it's been a couple weeks now and after seeing three weekly episodes of So You Think You Can Dance (Malaysian edition), I am thoroughly hooked! Luckily, the season finale is next weekend, just two days before I fly to Indonesia! Lucky timing to feed my obsession.
Well, gotta go... off to eat some mysterious noodle concoction.

P.S. When I say "Indiana Jones", I mean Raiders of the Lost Ark, and potentially a little Temple of Doom, but absolutely not Crystal Skull. That movie was L-A-M-E.

Yesterday, while walking home from sushi with the girls, a man in a pirate hat let me drive his
Segway.
Amazing!

In other news, it is so hot and humid that I barely ever want to get out of my bed in my frigidly air-conditioned apartment.

Okay, ONLY Korea...
(from a foreigner news website called The Hub, in my city - Jeonju) 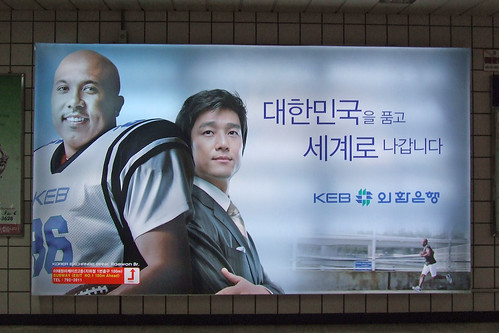 Always meant to blog this... in the Seoul subway, a familiar face...

(Look how tiny the Korean guy is standing next to him...) 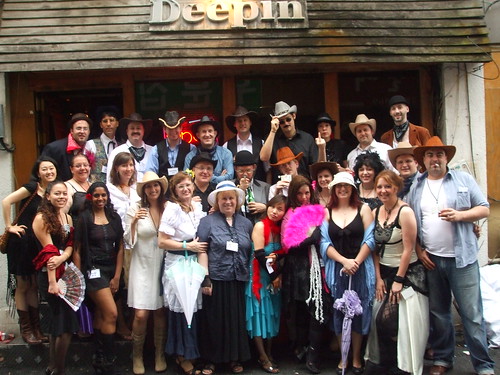 (See me in the front row with curly hair and pink fan and awesome shoes.)

Last weekend we did a Wild West murder mystery at the pub... it was a GREAT time. Most people were really in character, even though the cowboy clothes were hard to come by.

My character was Minnie Money, a rich east coast debutante who came to the Wild West for the first time and behaved like a saloon girl to attract the rugged cowboy types. A lot of people wrote down that I was the killer, which is awesome, even though it was untrue.

We also had a competition in the evening for who could make the most (fake) money, which I won! However, I cannot reveal my secrets on how I did it ;)

...what's funny about Korea is that although we work VERY little, life is EXTREMELY busy. I will never understand how that happens.

Anyway, finally started planning for Southeast Asia,
which is a good thing considering that I leave in TWO WEEKS.

It took me a while to get excited, honestly, because although I had a hella lot of fun in Europe/Africa, that was a LONG-ASS trip. After a while of backpacking you just want to be clean and climate-controlled and eating food that costs more than a dollar.
This upcoming trip is 6 weeks, which is longish but not so so long when I think about it. Luckily it's in super super cheap countries, so I don't have to eat just bread and olives like I did a few times in Spain and Italy. I could probably get a FEAST in Indonesia for less than two dollars. Anyway, I started with a HUGE itinerary a few weeks ago, and eventually narrowed it down yesterday to 25 cities in 3 countries (Malaysia, Singapore, Indonesia). This is very realistic, and a few of them are optional so I should be okay. Even overnight trains only cost $5-$10... compare to the Trenhotel from Barca to Madrid, which I think I remember being like $150 at the time? Or, Euro rather, which is much worse. Yeah, so much for travelling overnight to "cut down on costs"...

Went with the girls to see it, all dressed up, and then for martinis afterward. So fantastic.
Also, Korea can be very back-and-forth conservative. Two girls got up and left during one of the sex scenes. Yet, no one so much as gasped when they showed the guy's penis later on. Hmmm.
Collapse